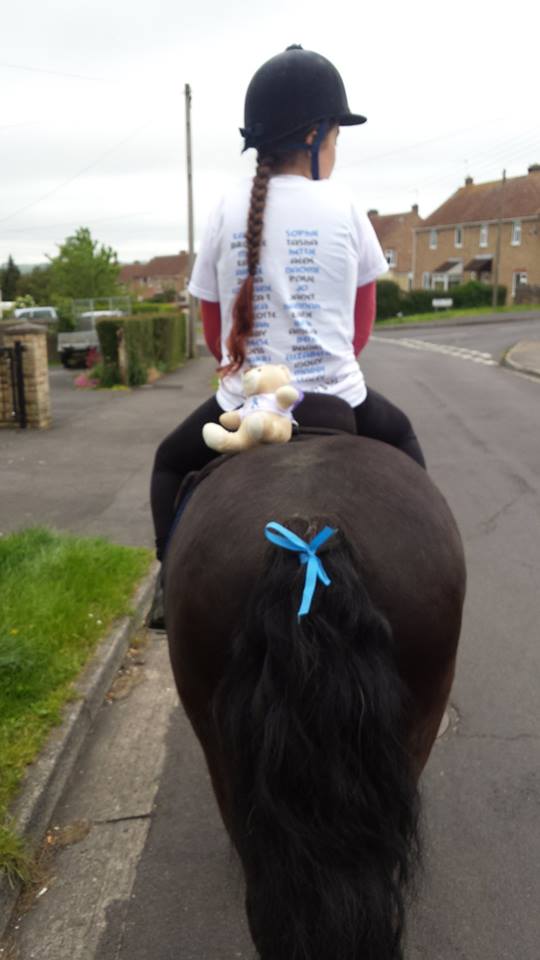 Among the truly remarkable efforts of the global patient community to make May 2015 possibly the most successful ever for ME awareness and fundraising for biomedical research and culminating in a hugely successful few days of Invest in ME International Biomedical Research Conference Events, one little girl’s endeavours stood out as a shining example of the spirit of Let’s Do It for ME!

Makayla Nunn was ably assisted in her range of tremendous efforts by her mother Michelle, pony William, Trixie the Yorkie, and supported by a galaxy of friends old and new, including award-winning Tina Blackwill of Christina’s Cakes and of course, the Prof. himself, Let’s Do It for ME Bear. Makayla and Mummy began planning ahead for May with their ideas for a Horse Walk, inspired by Walk for ME, and personalised ME Awareness Bear pictures (see March blog).

The Horse Walk took place on May 24th. Team Makayla also joined in and supported other events throughout the month, such as poster campaigns and Cordon Bleu for ME to help celebrate the 10th Invest in ME Conference, ending on a stylish note with Black Dress Day in honour of those with severe ME, as you can see in our Photo Album of Makayla and Mummy Awareness and Fundraising for Invest in ME Research on Facebook.

These outstanding efforts were rewarded by generous sponsorship bringing Makayla into the top 3% out of 65838 fundraisers on JustGiving in the month of May! You can also support Makayla simply by nominating her for a JustGiving Award.

Michelle Nunn kindly wrote the following for our blog:

As a mum I’ve had to sit back and watch my little girl’s life be turned upside down due to ME. This was a little girl who was off swimming at 7am on a Saturday then doing ballet and tap lessons followed by horse riding, all in one morning.

Then one day that all changed and because of ME. I so wish they were right every time I heard people say she can’t have it she’s not 13 or kids don’t get this, but sadly children do get this.

This illness  took so much from Makayla but every year we would sit at the computer watching all that was going on for ME awareness. Each year she would say “I want to do something” and each year I had to say not this year sweetheart, you’re not well enough.  Words that no mum should ever have to say to a child.

Again I was told the same thing “I want to do something to raise money for ME”, but this year I said something I never thought I would be able to and that was – ok then you can.  We set out strict guidance  on how we were going to do it and for once she agreed, rather than fight me and push herself.

Invest in ME were great. They sent us t-shirts and a bear for Makayla.  But the t-shirts were to big for her to wear so we said we would get her own printed up.  Then she said I’ve not been able to do this and I know so many others that can’t do this. I’m so lucky that I can but I want to include the others as it’s hard sitting there watching and not being able to do anything.  Makayla is aware of other children from as young as 4 who have ME and whose mothers are in a support group with me on Facebook. She said I want to do this for them.  With this we thought we would have their names on the back of her t-shirt so that they were part of it and being thought of on that day.

We could only pick a few names for her t-shirt after all, she’s only little and even if we printed a horse blanket for William we still wouldn’t have enough room and that’s just for children we know.

We have had so much support from people and as a way of thanking them Makayla wanted to have their names on her shirt as well.  We sadly lost  a very special friend in May 2014 who understood  Makayla’s illness and didn’t have any expectations of what she could and couldn’t do so we thought it fitting to have his name on the shirt too. Seeing as it was for ME we also felt that we would like to walk in memory of Emily who suffered with ME and also sadly lost her life. I was so proud of Makayla. The day before, she rested so much, she really saved them spoons ready for the big day.

Months of fundraising finally  led to this day. I woke up in the morning still with the fear that is today the day she is bad and can’t get out of bed, but like each morning I heard her up and like every day for the last 3 and a half years I felt the relief rush through my body and the “it’s ok she’s up”.

Makayla had great fun getting William ready doing his hair with blue bows.

We set off and went to the park, where we caused such a stir as not every day do they see two horses, one of which had a superman blanket on and one covered in blue ribbons. A group of children asked Makayla what she was doing it for, to which she replied I have this illness called ME, it’s not very nice, it makes me very tired, I hurt, I can’t do things like I used to so I want to raise some money to find out what causes it and how to make people better. How I stopped the tears I don’t know. Her words “to make people better” filled me with pride. She could have said “so I get better” but her selflessness shone through.

Her ride through the tiny village raised a extra £60 but most of all she raised so much awareness into this awful  illness.

Sadly, we had a few days payback but when asked she said “I would do it any day. I wanted to raise £150 which I did then I thought up it to £300 which again I smashed it so I wanted to aim for £500 then £800 which I never thought I would ever get. I’m so amazed I’ve got £2000 with Gift Aid. I never thought for one minute  I would ever do that. I can’t believe how many people have supported me.”

It’s amazing to watch her face every time I tell her someone’s sponsored her. It doesn’t matter if its £1 or £100, that smile is still the same beaming from ear to ear, a smile I’ve not seen in such a long long time because of this illness.

The worst thing for Makayla with being ill is that she’s seen many family and friends disappear since she’s been ill and they don’t get it, yet through this ride it’s shown her people do care and for that we can’t thank you all enough. A thank you message from Makayla and William ..

2016 UPDATE: Makayla is aiming to do it again in 2016 and her new JustGiving page is here – https://www.justgiving.com/Makayla-Nunn/ 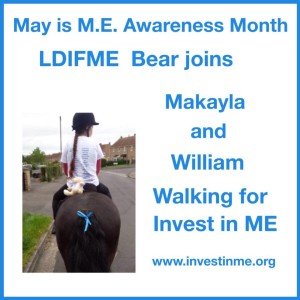 Click here for Photo Album of Makayla and Mummy Awareness and Fundraising for Invest in ME Research.