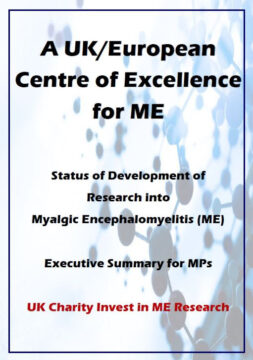 Updated Executive Summary for MPs and others on includes additional links to the recent work of Invest in ME Research and the research being funded. MPs will only know about this progress, and the need to support it, if informed by their constituents so please keep your MP updated if you are a supporter. The Executive Summary for MPs pdf is on the charity’s UK Centre of Excellence webpage.

January 2020:
Carol Monaghan MP has decided to reconvene the All Party Parliamentary Group (APPG) on ME. The first meeting is 14th January 2020.  Contact and Inform Your MP.

24th January: You can now watch the debate here.
Hansard Transcript here.
Huge thanks to everyone informing their MP and to all the MPs supporting.
Our blog with commentary on and extracts from the debate is here.

A House of Commons Backbench Debate on a Motion relating to appropriate ME Treatment is scheduled for 24th January 2019. The person responsible for getting all of this started is a supporter of Invest in ME Research (IiMER) and a constituent of SNP MP Carol Monaghan. The supporter wishes to remain anonymous but deserves thanks from everyone interested in this debate. Click on the following for related documents produced by IiMER.

One Page Summary of Recommendations

Give ME Patients a Future (32 pages)

A UK Centre of Excellence Executive Summary for MPs

Their page with intro and all the links.

IiMER supporter Paul Kayes drafted a Letter to MPs for House of Commons Debate on ME which you are welcome to copy/amend for your MP.

Find your MP at this link.

The substantive motion for the debate is:

“That this House calls on the Government to provide increased funding for biomedical research into the diagnosis and treatment of ME, supports the suspension of Graded Exercise Therapy and Cognitive Behaviour Therapy as means of treatment, supports updated training of GPs and medical professionals to ensure they are equipped with clear guidance on diagnosis of ME and appropriate management advice to reflect international consensus on best practice, and is concerned about the current trends of subjecting ME families to unjustified child protection procedures.”

A parliamentary debate on the research and treatment of Myalgic Encephalomyelitis (ME) secured by Carol Monaghan MP for Glasgow North West was held on Thursday 21 June 2018 at 1.30-4.30pm in Westminster Hall. The request for debate was raised with cross-party support at a Back Bench Committee Meeting on 5 June 2018.

UK charity Invest in ME Research published a June 2018 status update for MPs and others on the progress of the UK Centre of Excellence for ME research and treatment: investinme.org/ce-cofeforme.shtml#exsu

A report by Invest in ME Research on the broader issues of accountability and actions needed is here: http://investinme.org/IIMER-Newslet-1806-01.shtml

This includes their recommendation that a five-year, ring-fenced budget of £20 million per year for biomedical research into ME should be allocated, and funding for the Centre of Excellence for ME that the charity has been facilitating the development of for the last eight years.

It was wonderful to hear the Invest in ME Research Centre of Excellence for ME research and treatment raised early on in the debate. The Parliamentary Under-Secretary of State for Public Health and Social Care said it sounds very promising and that he looks forward to hearing more about this. From the perspective of the Let’s Do It for ME campaign, it was also humbling to be acknowledged for raising over £800,000 to date to enable the biomedical research programme to get underway in 2013 (Donate here to help us make it to a £million); and the sad fact that we have not all lived to see this day.

Several friends and supporters were named during the debate, including former MP Dr. Ian Gibson and Professor Malcolm Hooper, Chair and former Chair of the international Invest in ME Research Conference, held annually since 2006 in Westminster near the Houses of Parliament, bringing patients and carers together with doctors, scientists, MPs, journalists, and more recently, major public health research funders such as USA’s NIH and CDC, referred to in the debate. (The conference and the DVD of the full presentations are fully CPD-accredited by the Royal Colleges.)

Invest in ME Research ‘Conference Week’ has grown year on year to include a 2-day closed workshop for researchers to share unpublished data, form collaborations, plan future projects; a 1-day meeting for young or early career researchers; AGM of the European ME Alliance, which formed the European ME Research Group. Together with the Centre of Excellence, these are no mean feats for a small charity run entirely by volunteer patients and parents of children with ME (investinme.org).

It was heartwarming to hear so many MPs speaking with such sincerity and clarity on behalf of their constituents and many excellent points were made, such as the plight of children and access to education (another initiative by Invest in ME Research is the UK trial of a robot telepresence at school for housebound students with ME).

Awareness events organised by patients from homes/beds were also mentioned, such as Light Up the Night Blue (initiated in Canada, NI joined in, Invest in ME Research were asked to coordinate in UK and it took off from there).

We thank all political representatives supporting people with ME and their families, including many MPs unable to attend this debate, and special thanks to those raising and noting the Invest in ME Research Centre of Excellence for ME research and treatment, as you can see from the extracts below featuring contributions by Sir Henry Bellingham (North West Norfolk), Sir Edward Davey (Kingston and Surbiton), Andrew Selous (South West Bedfordshire), Dr. David Drew (Stroud), and Steve Brine (Parliamentary Under-Secretary for Health and Social Care).

Background
A short Westminster Hall debate on the subject of the PACE trial and its effect on people with ME was held on 20 February 2018. Read about that here: http://www.investinme.org/IIMER-Newslet-1802-02.shtml

Echoing the subtitle of the book ‘Science, Politics….and ME’: A health scandal in our generation, by Dr Ian Gibson and Elaine Sherriffs – Carol Monaghan described this trial as one of the biggest medical scandals of the 21st century. The book is available on Amazon. The Foreword is by the excellent Jon Campling whose wife Ali has ME and you can raise an extra donation to Invest in ME Research via Amazon Smile or by using this referral link.

This petition to government was inspired by the book and reached just shy of 11,000 signatures in about six weeks instead of six months as petitions had to close early in May 2017 because of the snap general election.

Worth noting that a Westminster Hall debate in February 2011 prompted an announcement by the UK Medical Research Council to ringfence £1.5m (later increased to £1.6m) for biomedical research to investigate the cause/s of CFS/ME. The debate was earned by Ian Swales, then MP for Redcar, in support of his constituents Margaret Laverick and her daughter Jan Laverick, sufferer of severe ME since her teens and co-founder of the Let’s Do It for ME campaign, which launched a few months later in July 2011 to help raise awareness and funds for the Invest in ME Research UK Centre of Excellence for ME biomedical research programme, enabling this to get underway in 2013.

Over £800,000 has been raised or pledged so far specifically for the Invest in ME Research Centre of Excellence for ME biomedical research programme aiming to establish diagnostic lab tests and medical treatments for ME.

Donate here to help this progress.

Invest in ME Research is run entirely by volunteers working every day of the year.

Reminder of June 2018 status update, which you may wish to send your MP and others for information on the progress of the UK Centre of Excellence for ME research and treatment: investinme.org/ce-cofeforme.shtml#exsu We’ve drafted a cover letter to send your MP if you wish.

Thank you for your support!

ITV news February 2011 featuring brave undercover agent for change, Jan Laverick, co-founder of the Let’s Do It for ME campaign to support Invest in ME Research Centre of Excellence for ME…