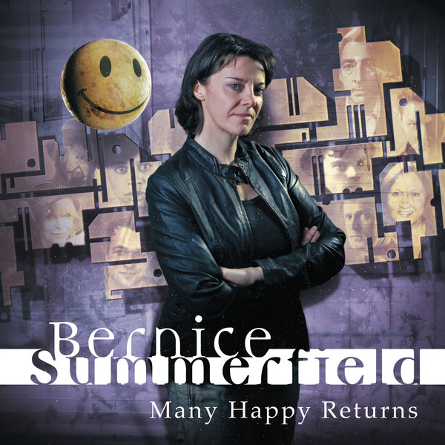 A very special Big Finish Productions release to celebrate the twentieth anniversary of archaeologist and adventurer Bernice Summerfield.
Many Happy Returns is a unique feature-length drama where every penny goes to Invest in ME Research.

Bernice Summerfield – Benny to her friends – has lived through many adventures. She’s a professor of archaeology from the 27th Century. She’s travelled with the Doctor, set up home at various academic establishments and been across the galaxy from one end to another, battling the likes of Daleks and Draconians, Monoids and Martians. She’s also battled pig-headedness, brutality and ignorance. Find out more and follow her adventures here.

“Jac Rayner first approached Big Finish about possibly doing a small charity download” explains producer Scott Handcock.  “Gary Russell and I discussed the idea with David Richardson and quickly came to the conclusion that the Bernice Summerfield range would be the perfect platform – not least because of Jac’s close connections with the character. So I started sounding out a few actors, writers, sound designers – as you do – and nobody we asked said no… so it ended up being the sort of epic rolling adventure we never anticipated! It’s amazing how many people have donated their time not only for Jac’s charity, but for what will hopefully be a very special release for Benny fans.

We’ve tried to reunite as many familiar faces as possible. It’s the Bernice Summerfield equivalent of The Five Doctors – twenty years, a whole host of old friends, and all in the name of charity! I know I speak for everyone involved when I say it’s been an absolute pleasure, honour and delight to work on – and one of the maddest days in studio we’ve ever had!”

An article about Many Happy Returns featured in Dr Who Magazine raising much needed awareness of ME and the proposed Centre of Excellence as well as celebrating the release of the charity audio.

THIS EXCLUSIVE RELEASE IS ONLY AVAILABLE FROM THE BIG FINISH WEBSITE

Price: £10
Duration: Approx 90 minutes
Listen to the trailer and download the play at
www.bigfinish.com

(With thanks to all involved very kindly giving their time for free. All proceeds go to the charity Invest in ME Research.)