We have a generous offer from Katherine T Owen for anyone considering switching their banking to the Nationwide Building Society.

Katherine will recommend you via Nationwide’s Recommend a Friend. You will both get £100 from Nationwide and Katherine will donate £50 to Invest in ME Research for everyone who switches via her recommendation email.

You would need to switch your main current account to a Nationwide FlexAccount, FlexPlus or FlexDirect account within 90 days of the recommendation, and transfer at least two Direct Debits as part of the switch (standing orders and recurring card payments don’t qualify). Switching can be done online. The the £100 will be taken back if you close the account within 6 months. Full details, T&C, FAQs here: nationwide.co.uk/products/current-accounts/our-current-accounts/recommend-a-friend-tab

Ali Cross is the first to take up Katherine’s offer and both have kindly donated £50 to Invest in ME Research.

If you want to switch to Nationwide and help Invest in ME Research at the same time then please contact us to put you in touch with Katherine.

Many thanks to Katherine, Ali and everyone supporting Invest in ME Research! 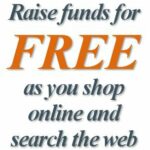 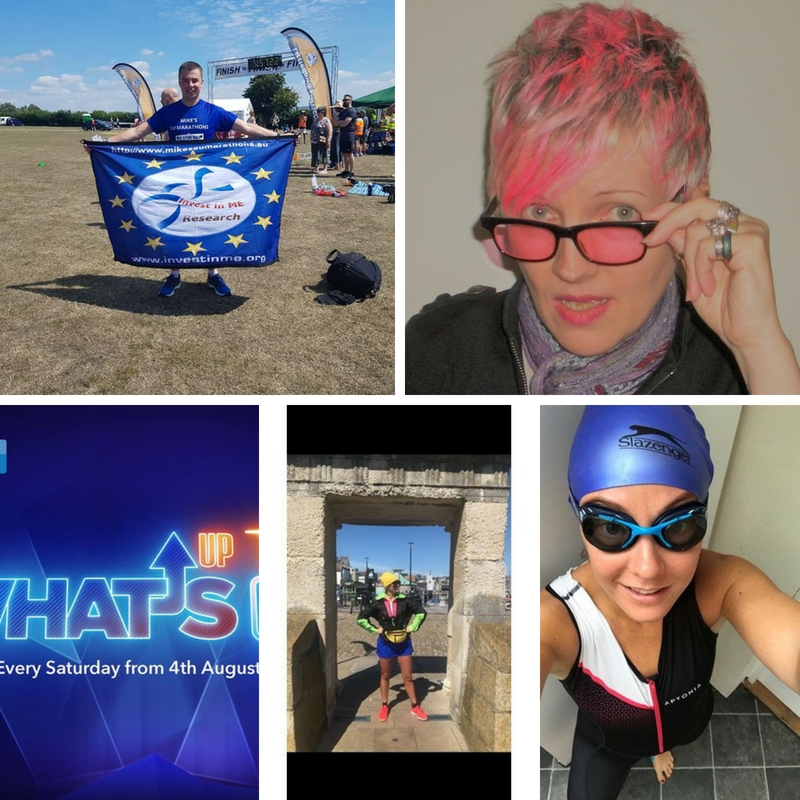 In the sizzling summer heat Olivia Robinson and Rachel Froebel did the AJ Bell Triathlon and Mike Harley ran the Sturminster Newton Half Marathon in training for the next of his 28 EU Marathons for Invest in ME Research.

All three are raising awareness and vital biomedical research funds for the charity because their friends have Myalgic Encephalomyelitis (ME).

What’s Up TV also kicked off their campaign to help raise awareness of ME.

Actress Olive Robinson (pictured left) fitting in her training and the triathlon in the middle of 16 shows in Newcastle, explained…

“M.E. affects an estimated 250,000 people in the UK, and around 17 million people worldwide. One of those precious humans is my best friend of 25 years. A once, very active woman who now spends most of her days in a chair, bed or wheelchair. A reader, dog walker, runner, swimmer, weight lifter, shape-thrower (!) who’s bound by her body’s inability to produce energy. People have often asked me how I have been so diligent with my training and the answer is so simple…”

“A very close friend of mine Sofija has been diagnosed with M.E. (Myalgic Encephaloyelitis, also known as Chronic Fatigue Syndrome). It is a severe neurological disease that leaves 25% of patients bed bound. There is currently little treatment available on the NHS and no cure. Many people don’t understand the impact this disease has on people’s lives so I want to contribute to supporting this vital cause and would hugely appreciate your contributions.” 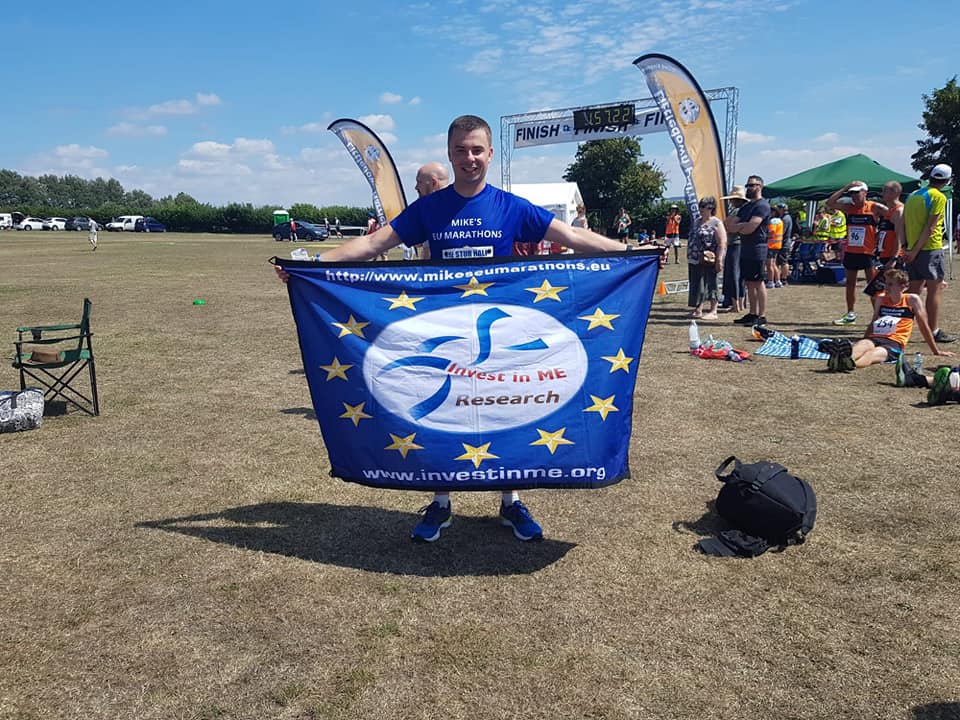 “Over 250,000 people in the UK suffer with the ME and that includes 25,000 children as well as one of my good friends who has suffered for almost 10 years with the illness. Watching him drift from year to year without improvement is extremely hard to watch, I want to try to do something to stop this. He’s not depressed or making it up, he’s one of the most popular and positive people I know. He’s ill. Invest In ME (www.investinme.org) are committed to raising funds and awareness to find the cause and cure and are a voluntarily run organisation doing some amazing work. They’re the only organisation really making progress in working with scientists and researchers to find cures and treatments. They will be opening a specialist centre of excellence for ME in 2018 where patients can get diagnosis and treatment and have even crowd-funded enough to hold their own clinical trials to find a cure/treatments. They are also funding the PhD’s of students investigating the cause and possible treatments of the disease.”

On Saturday What’s Up TV opened their new series on Sky One (in which they hope to build awareness of ME) by featuring a performance of the powerful poem One Stupid Dot by Stacy Hart, who writes as Runnin On Empty (ROE) and makes music as the amazingly talented Mama Chill.

What a weekend – many thanks everyone supporting!

See more Fundraisers for Invest in ME Research 2018 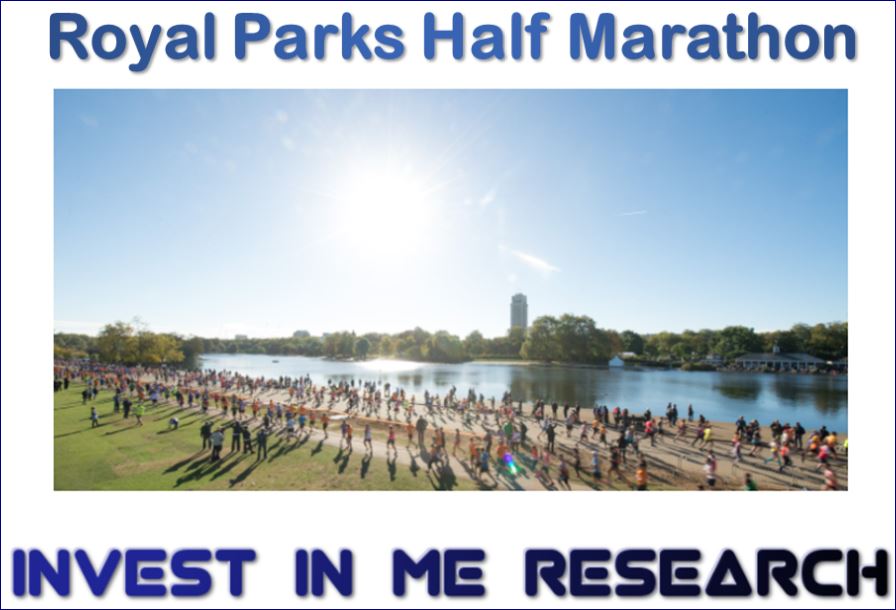 Invest in ME Research has secured FIFTEEN places in the London Royal Parks Half Marathon on Sunday 14th October 2018 and some are still available.

If anyone you know may be willing and able to join Team IiMER 2018 in this event then details are at: investinme.org/IIMER-Newslet-1801-02.shtml

This will be another great opportunity to raise awareness of the charity’s strategy of funding high-quality biomedical research into ME (Myalgic Encephalomyelitis) and the development of a UK/European Centre of Excellence for ME.

All funds raised for Invest in ME Research will go to supporting, promoting or funding biomedical research into ME so please spread the word.

This Royal Parks Half Marathon route takes in the capital’s world-famous landmarks on closed roads and winds through four of London’s eight Royal Parks – Hyde Park, The Green Park, St James’s Park and Kensington Gardens in all their autumnal splendour.

There are 16000 runners in the marathon.

To find out more about joining Team IiMER in the Royal Parks Half Marathon 2018 and to contact Invest in ME Research please click here.

Pictured below, Christian, Helen and Gemma did the Royal Parks Half Marathon for Invest in ME Research in 2017 (T-shirt designs may differ for 2018).

Huge thanks to Team IiMER and everyone supporting! 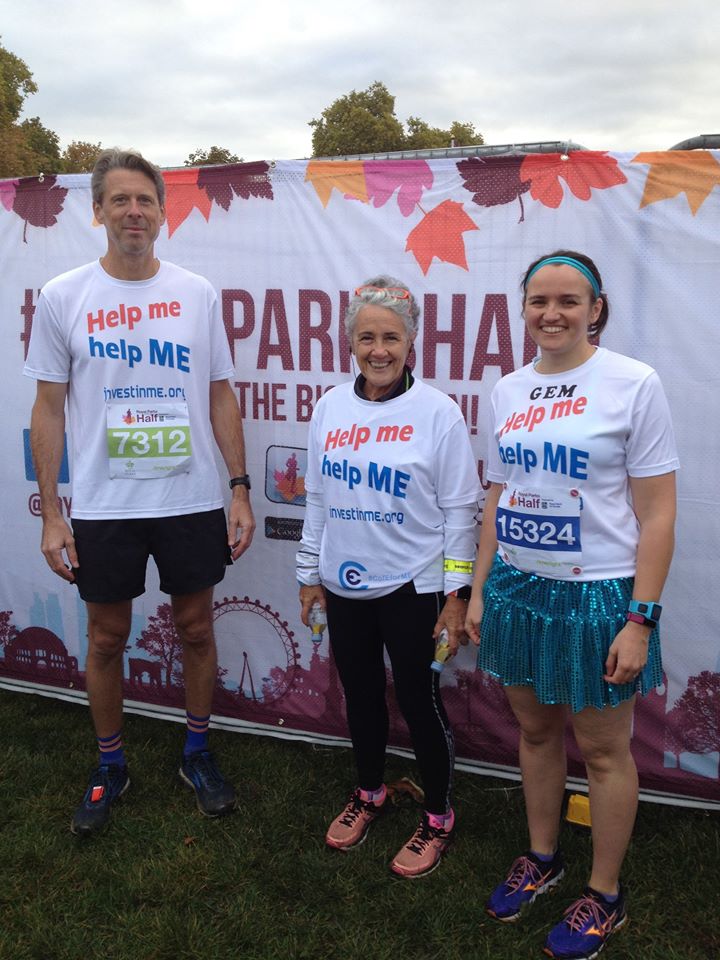